Menu to other web pages
Home Page (or click banner) Court sitting of 5-Jul-01 Court sitting of 12-Jun-O2 Letter from Commission for the Administration of Justice Lawyers 1 Lawyer 2 Lawyer 3 The poison of pills I never took from the very start Letter from Tribunal in 2005 (this page) The unfounded accusations Written in the Court sentence: used to find them already dead My Pets My research Malta Police Frame-Ups The fake Psychiatrists' reports and Magistrate Carol Peralta's revenge on me My court case which vanished from the Court Archives Emails and letters I sent Medical Council Members in 2017 Emails sent to Animal Welfare Unfounded hatred towards me, even ending with a death fatwa Impunity Malta Style (this page) Victims of Psychiatry in Malta Depicting poison as cure Money down the drain at Mount Carmel Hospital Who is Frederick Azzopardi? Contact 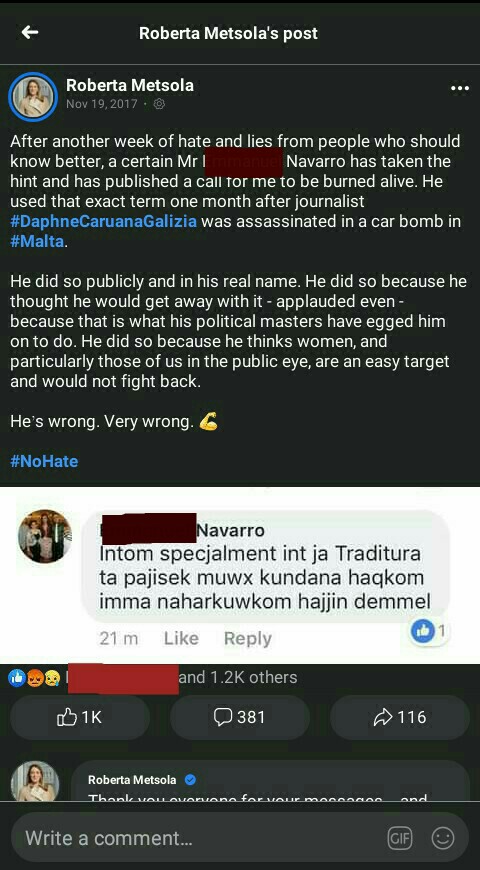 Note how man / woman of power take the utmost revenge against the man in the street for the slightest mishap on them, in this case against this old man Navarro who in a mere facebook comment wrote that "traitors" like and including Roberta Metsola "deserved" to (not "should") be burnt alive. But of course she sees nothing wrong the other way round, great offences by man / woman of power abusing their position on the man in the street as happened with me, so much she has double standards. Imagine this Navarro ending framed up and character assassinated by the Police saying they found his car fuel tank full of petrol ready for committing the crime, some influential Professor you can expect from University of corrupt Malta issues on his 24x7 blog a death fatwa to have this Navarro crucified, when Navarro tries to make his point in Court the Magistrate cuts him short threatening him of smashing him against the wall, the Magistrate seeing he now risks his career, appoints a Psychiatrist to label Navarro of suffering from "delusions of persecution" to make it difficult for him to uncover the abuses on him and be that easily believed, Navarro ending drugged up, kidnapped, vilified with unfounded hatred by the media, defrauded by his own lawyers (1, 2, 3, 4a and 4b, 5a, 5b, 5c, 5img, 5rec_a, 5rec_b, 5rec_c and 5rec_d, and from those of the Legal Aid paid by taxpayers' money), abondoned all by himself to be further abused at leisure (1, 2, 3 and with my laptop broken), wherever he knocks for help he finds only closed doors, etc., and amid all these injustices, abuses and violations of human rights, Roberta Metsola remains silent, making herself complicit through her inaction, as she had done with me when informed her of my case. Guess one like Roberta Metsola ended the European Parliament President, and I submit a petition to the EP about the blatant impunity enjoyed in Malta by persons in high positions regarding my case and question Metsola's role, through her silence inaction on the matter, as head of one of Europe's top institutions, and they found my petition as inadmissable and "incoherent reasoning" (as if a magistrate who had a 'parasite ... scum' of journalist arrested, would ever tolerate a "mental" writing stupidities and lies on him). Was a screenshot as above (size about 110kB) enough to prosecute against Navarro (a simple man in the street), but an entire website (size about O.7GB) full of documents and evidence not yet enough to prosecute against those (very big heads) involved? Impunity in Malta can be understood even better if one considers that had I suffered all these abuses in a normal country, I would end compensated say one billion euros, while in Malta even if I had to spend a billion euro they would still have not started prosecuting those involved, and if they ever start, it would be just a farce. 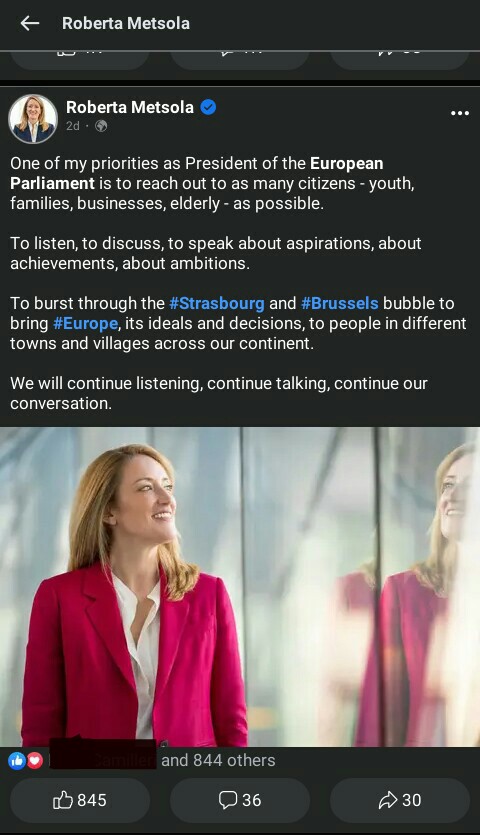 "One of my priorities ... is to reach out as many citizens ..." ... "to listen, to discuss, to speak about aspirations, about achievements, about ambitions", but to not care, to not listen, to not discuss injustices, abuse of power, violations of human rights on the man in the street, for leaving them out was probably no coincidence at all. In other posts she says "We believe in equality before the law." I leave it up to you to judge if Roberta Metsola is just another fake politician, ... at EU level, ... from corrupt Malta. 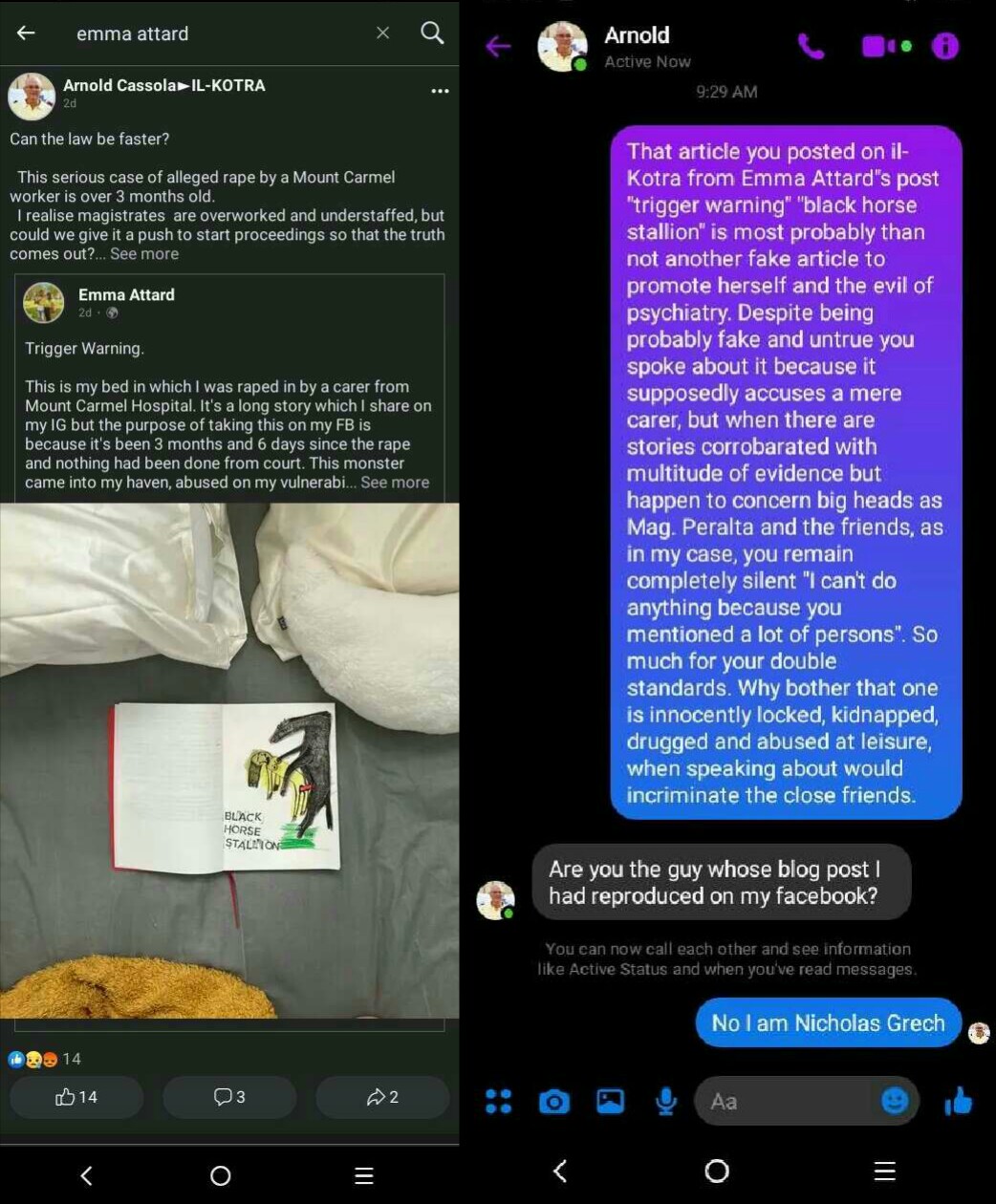 Writing to some member of the government in corrupt Malta, ends being too snob to even reply back let alone take action. Writing to the non-existent just as well corrupt opposition ends with no different outcome. And of course expect nothing better from the media - for by writing fake articles every now and then, besides the dictated ones, they keep themselves in business. Then there are those who choose to remain "independent," but only in name of course. This one Prof. Arnold Cassola portrays himself as the paladin of righteousness, despite his busy schedule at least he has the decency to reply back, and even does it within minutes, but once again, if it concerns abuses and injustices which would end incriminate the big heads his friends or friends of friends, no matter the multitude of evidence backing it, he hides away from even dare speaking as outlined in image above (take a close look at the left portion from a post he shared around 14-Jul-2022, if not enough, this is another one from her bestiality art series she so much fantasizes about when playing the victim. For when you want to portray yourself as a victim, don't portray your molester as an animal when not in a billionth chance can an animal ever rape a human, portray him say as one in his 50s disguised as a prophet doing it with a 9 year old girl he took as wife 3 years before. This thread of emails gives clues in proving the post was just the umpteenth local media fabricated story [LovinMalta, TvmNews, TimesOfMalta], yet this University of Malta Profs fell to it and shared it. On the right part am writing to him on messenger 2 days later on 16-Jul, asking him how he chose to share this fake abuse post but remains silent on abuses corroborated with multitude of evidence, so much for his double standards). There is also a certain Sandra Gauci, who every now and then uploads videos of her speaking on hot topics. I wrote to her around July '21 to speak on victims of Psychiatry, where as can be seen in this thread of emails, at one point on 12-Aug-2021 3:14pm she replied back with the following, translated in English:
I found someone also victim of the same doctor of yours (namely Psychiatrist David Cassar). I am trying to convince him to testify. This one his brother died from the medicines he prescribed him. Will keep you updated as the one involved wants justice and will work in your favour. For now I am not going to disclose anything, but you are not the only victim. At least you are (still) alive.
But this hope of some help was short-lived for I never heard anything more from her. For as the latin proverb says: CURAE LEVES LOQUUNTUR, INGENTES STUPENT - Slight griefs talk, great ones are speechless. Bad luck for the many victims of Psychiatry left all alone abondoned to their fate - another umpteenth death from it doesn't matter, what matters if one dares to speak against.