The very expensive injection Risperdal Consta with so dreadful side effects 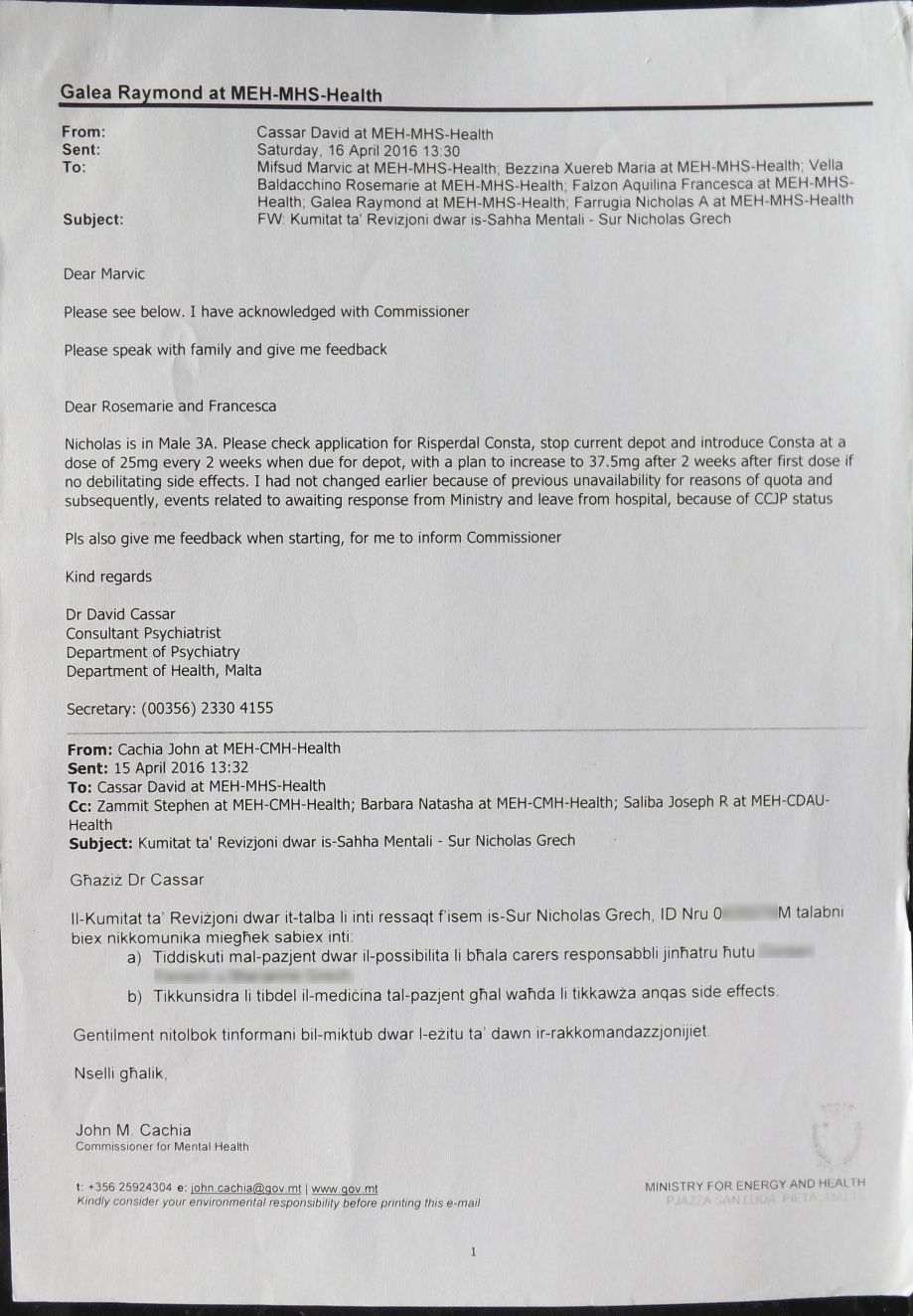 English Translation of the email in the bottom part:
The Committee of Revision regarding the request you made in the name of Nicholas Grech ID no. ---M asked me to communicate with you so that you:
a) discuss with the patient regarding the possibility that as responsible carers be appointed his sisters --- and ---.
b) consider to change the medicine of the patient to one which causes less side effects.
Gently ask you to inform me of the outcome of these recommendations.
John M. Cachia
Commissioner for Mental Health

As can be seen from the above email sent by the Committee for the Revison of Mental Health / John Cachia on 15-Apr-16 a few days after having appeared infront of the same Committee on the 7th, they are suggesting to Psychiatrist David Cassar to prescribe me a medicine which causes "less side effects" as they seem to have had some pity of me seeing the way that tyrant of Cassar had reduced me to a complete disabled with that injection Fluanxol / Depixol always swinging to and from like a pendulum amongst others (it is impressive considering that instead up to my arrest in 2014 I was that healthy person that I used to cycle from my hometown Mosta to work at Delimara and back almost every day with a bicycle made of iron, even in strong winds, which together with other errands roughly ended doing about 2 hours training every day). So that tyrant of Cassar as if to make them think he was following their suggestion, came up with the idea of prescribing me the injection Risperdal Consta, with the only problem being that in so doing he knew quiet well that he was going to cause me to suffer from not less but just as well severe and terrible side effects (in particular read the article: Risperdal Settlements And Verdicts concerning several lawsuits opened against its manufacturer). Also worth noting is the fact that they did not suggest him to prescribe me one with "no side effects" because in that fake branch of medicine called Psychiatry, this is something unimaginable - in Psychiatry making you sick / disabled with side effects is something to be expected, it is actually the norm. In fact one can note Cassar's phrase "if no debilitating side effects" rather than "if no side effects." In the following links one can see the approval by the Pharmacy of Your Choice (POYC) for Cassar's requests to prescribe me the injection Risperdal for years 2016/2017 and 2017/2018 (his original request way back in 2014 had been turned down "because of previous unavailability for reasons of quota" as outlined in Cassar's email above). 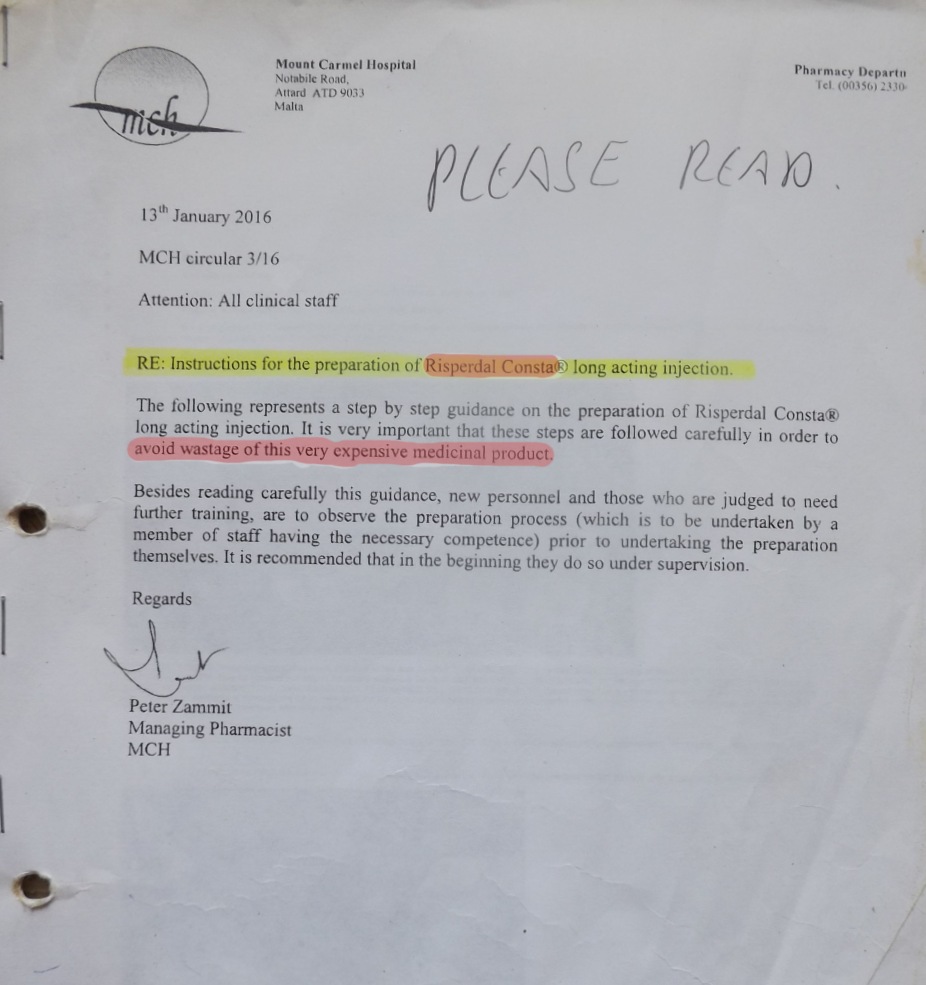 In the above letter the Managing Pharmacist of Mount Carmel Hospital (MCH), he is instructing the nursing staff to avoid wastage of "this very expensive medicinal product." The red shadings are my additions to the original. 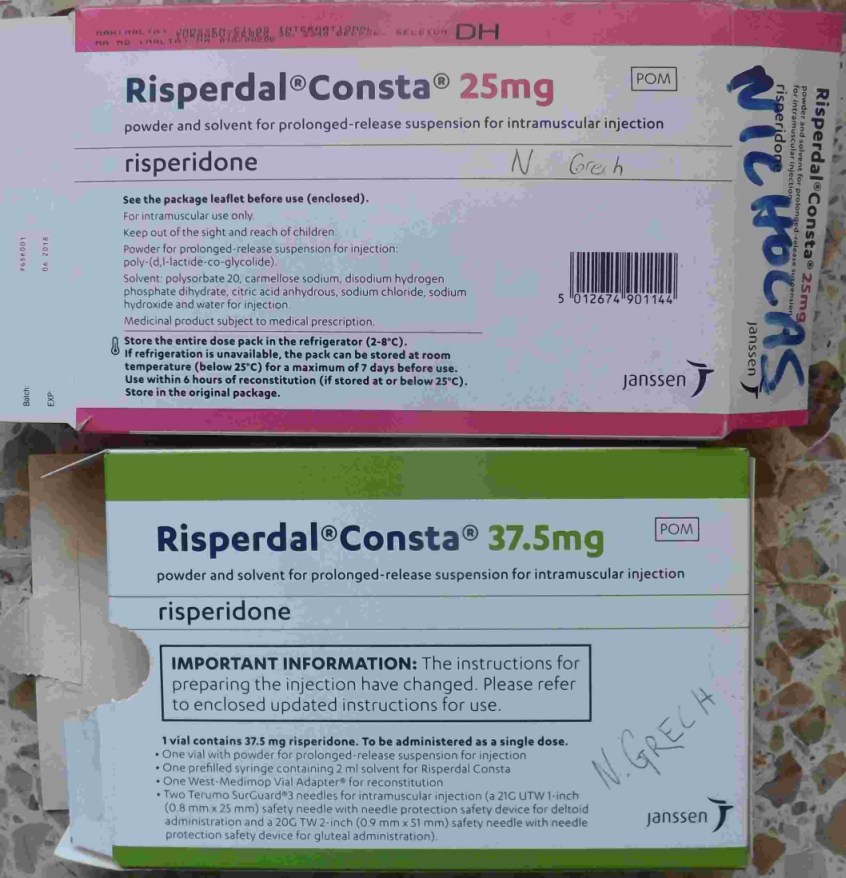 Boxes with my name inscribed on them by staff to be easily identified for whom they are destined. I ended suffering this so terrible injection Risperdal Consta 46 times in total, 31 times at a dosage of 25mg and 15 times at 37.5mg. When I searched the internet for its pricing found that it had costed the Government around €8,565 (15x€230 + 31x€165) over a period of a little more than one and a half years, with €4,950 of them after I had given Psychiatrist David Cassar that letter dated 9-Oct-16 informing him that the court report in my second case was based on erroneous conclusions. He only stopped it because he had the intention to experiment / try on me yet another dreadful injection, Olanzapine (Zypadhera) with just as well dreadful side effects, only that the authorities seem to have not approved his request possibly due to its even higher costs or problems once again with quota, and instead he began giving me the equivalent Olanzapine pills. 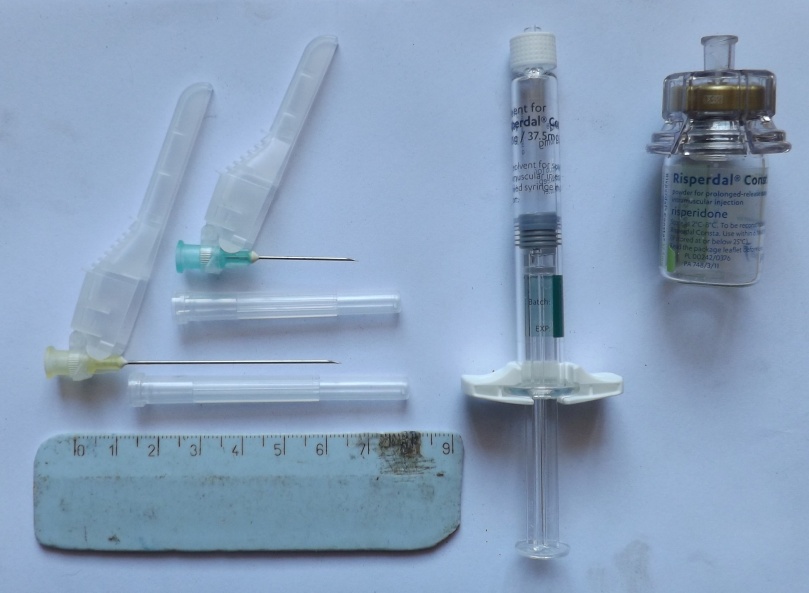 These are some of the items one would find in the boxes shown previously (excluding the ruler used simply to illustrate the size of the needles). On the extreme right is the bottle containing this so diabolic drug, a complete whole bottle they will end inject in you in one dose to dissolve slowly in you a bit at a time over a period of 2 weeks when you hear them calling your name again for the next dose. Every time you are injected this diabolic poison you feel humiliated, helpless, like a woman, forced by a pimp (a Psychiatrist) into prostitution (a Treatment Order enforced on you), who (the woman / the patient) has been raped (your health ruined through the side effects of Psychiatric cure) for the umpteenth time so that the pimp (the Psychiatrist) earns a living and becomes rich at your expense. You know another part of you, of your health, is lost but can do nothing other than seeing your strength go away a bit by bit. In the centre is the syringe which is screwed with the bottle to extract the drug by pulling the syringe out. On the left are 2 versions of needles: the 1inch / 25mm version if you choose it to be injected in the arm, and the 2inch / 51mm version if you choose it to be injected in the buttock to penetrate you even further deep (twice as much!) inside. I used to opt for the smaller version of needle which the staff sometimes penetrated it to almost touch me the bone. The chosen needle is screwed with the syringe, and then in one fast blow, as if they are playing darts from a few centimetres away, the needle is penetrated into your body. But the problems are yet to start. There was one so incompetent nurse who injected the drug (by pushing the syringe inside) in one fast blow in a split of a second making you feel your skin as if it wants to burst. Others pushed the syringe inside slowly as were supposed to do but as the syringe had to go a long way through, in the process they inevitably ended displace slightly the needle already infiltrated in your body making it really painful, with some even aggravated the matter having the tendency to keep chattering with their other colleagues staff as the clinic sometimes ended like a sort of leisure club. The point where you had been penetrated sometimes keeps hurting you for a couple of days, sometimes results in a small bump, and it was thus suggested that next time they penetrate you on the other side and so on and so forth. As regards that attachment shown at an angle with the needle, it is a means to dispose safely of the needle once used. 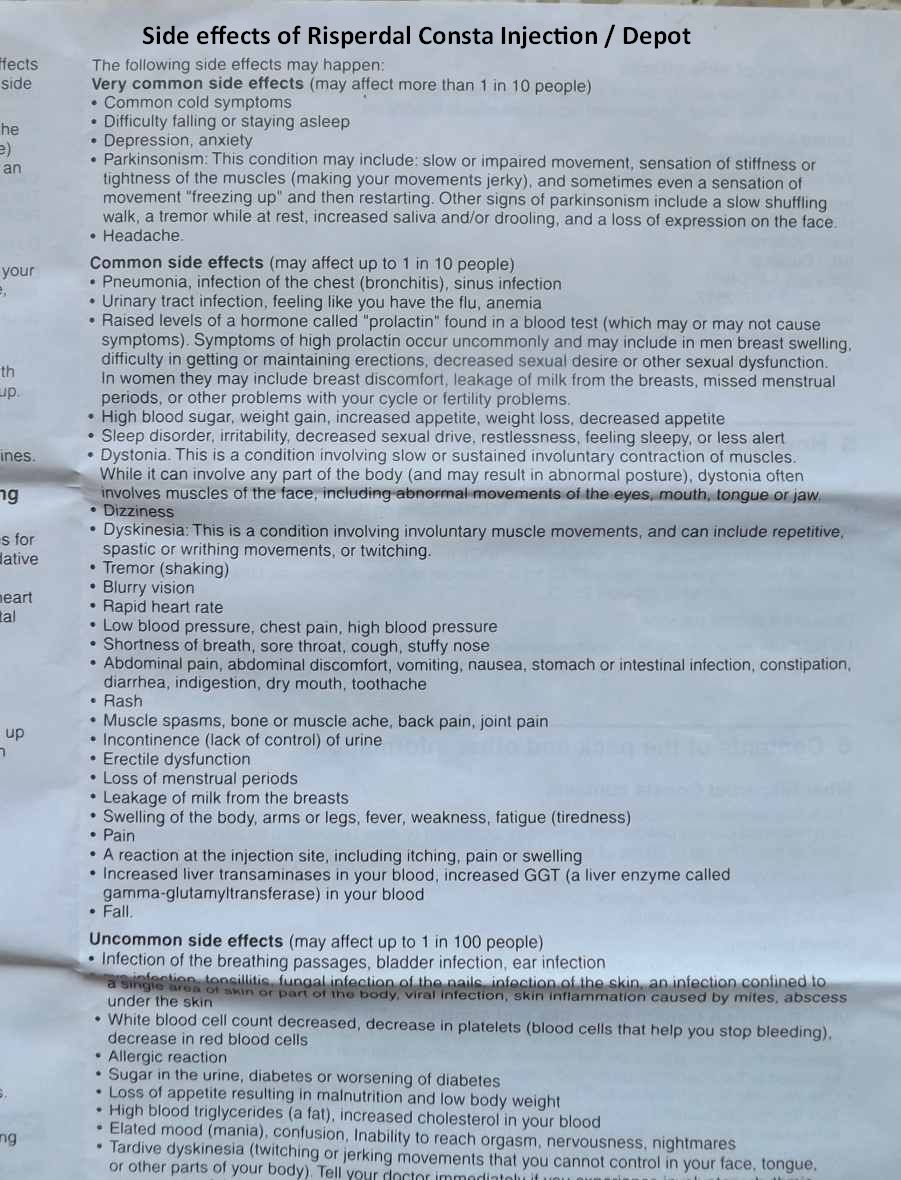 Very common side effects (may affect more than 1 in 10 people - in simpler words this means that it may affect 2, 3, ... 8, 9, or even 10 in 10 people, so much are REALLY "VERY COMMON")
- Common cold symptoms - in simpler words this means that eventually it ends ruining your immune system
- Difficulty falling or staying asleep
- Depression, anxiety
- Parkinsonism: This condition may include slow or impaired movement, sensation of stiffness or tightness of the muscles (making your movements jerky) and sometimes even a sensation of movement “freezing up” and then restarting. Other signs of parkinsonism include a slow shuffling walk, a tremor while at rest, increased saliva and / or drooling, and a loss of expression on the face.
- Headache.
Common side effects (may affect up to 1 in 10 people)
- Pneunomia, infection of the chest (bronchitis), sinus infection - again symptoms of your immune system being ruined: you become ill more often and take longer to recover.
- Urinary tract infection, feeling like you have the flu, anemia
- Raised level of a hormone called “prolactin” found in a blood test (which may or may not cause symptoms). Symptoms of high prolactin occur uncommonly and may include in men breast swelling, difficulty in getting or maintaining erections, decreased sexual desire or other sexual dysfunction. In women they may include breast discomfort, leakage of milk from the breasts, missed menstrual periods, or other problems with your cycle or fertility problems.
- High blood sugar, weight gain, increased appetite, weight loss, decreased appetite
- Sleep disorder, irritability, decreased sexual drive, restlessness, feeling sleepy or less alert
etc.

The most dreadful side effects I experienced from this so dreadful injection Risperdal Consta were: difficulty to sleep, and if I manage to fall asleep, end waking up within 1 or 2 hours maximum and then it will be totally impossible to sleep before at least another day; Parkinsonism especially in my left leg when with time began having problems simply to climb up or down a stairs or even to wear a trousers; and above all, impotence. When you tell the cretin of a Psychiatric, usually some recently graduated one with barely any experience, who comes in the name of Cassar (as Cassar rarely came for ward-rounds in MW3A where I was) about its many dreadful side effects, he tells you to ignore them because according to him the company lists the side effects "to be covered by insurances" - go explain to a cretin of this sort that with this logic the insurance companies would end making good for something purely fake. As regards the side effect of impotence, he jokingly replies telling you that "if one day you happen you want to shake it, tell us and we will prescribe you a pill to be able to do it - jekk xi darba tkun trid iccekcku xi naqra, ghidilna u ntuk pirmla kemm tfaqqghalu tnejn " to the great laughter of all those that happen to be in the ward-round room (social worker, occupational therapist, students, nurses, etc. - a complete circus) with some nurse dare adding "what you want more - xi trid aktar " - a good example of what Psychiatry actually is: taking pleasure in others misfortune from it originated - as if that tyrant of Cassar comes telling me when he is about to do it with his so very fat wife getting fat by the hour as she uses her position in that fake Medical Council to cover-up her fraudulent husband.