Menu to other web pages
Home Page (or click banner) Court sitting of 5-Jul-01 Court sitting of 12-Jun-O2 Letter from Commission for the Administration of Justice Lawyers 1 Lawyer 2 Lawyer 3 (this page) The poison of pills I never took from the very start Letter from Tribunal in 2005 (this page) The unfounded accusations Written in the Court sentence: used to find them already dead My Pets My research Malta Police Frame-Ups The fake Psychiatrists' reports and Magistrate Carol Peralta's revenge on me My court case which vanished from the Court Archives Emails and letters I sent Medical Council Members in 2017 Emails sent to Animal Welfare Unfounded hatred towards me, even ending with a death fatwa Impunity Malta Style Victims of Psychiatry in Malta Depicting poison as cure Money down the drain at Mount Carmel Hospital Who is Frederick Azzopardi? Contact

Script of the court sitting of 12-Jun-02, mentioning the name of Martin Fenech whose turn it was to be appointed as legal aid but instead Magistrate Carol Peralta appoints and mentions Tonio Azzopardi 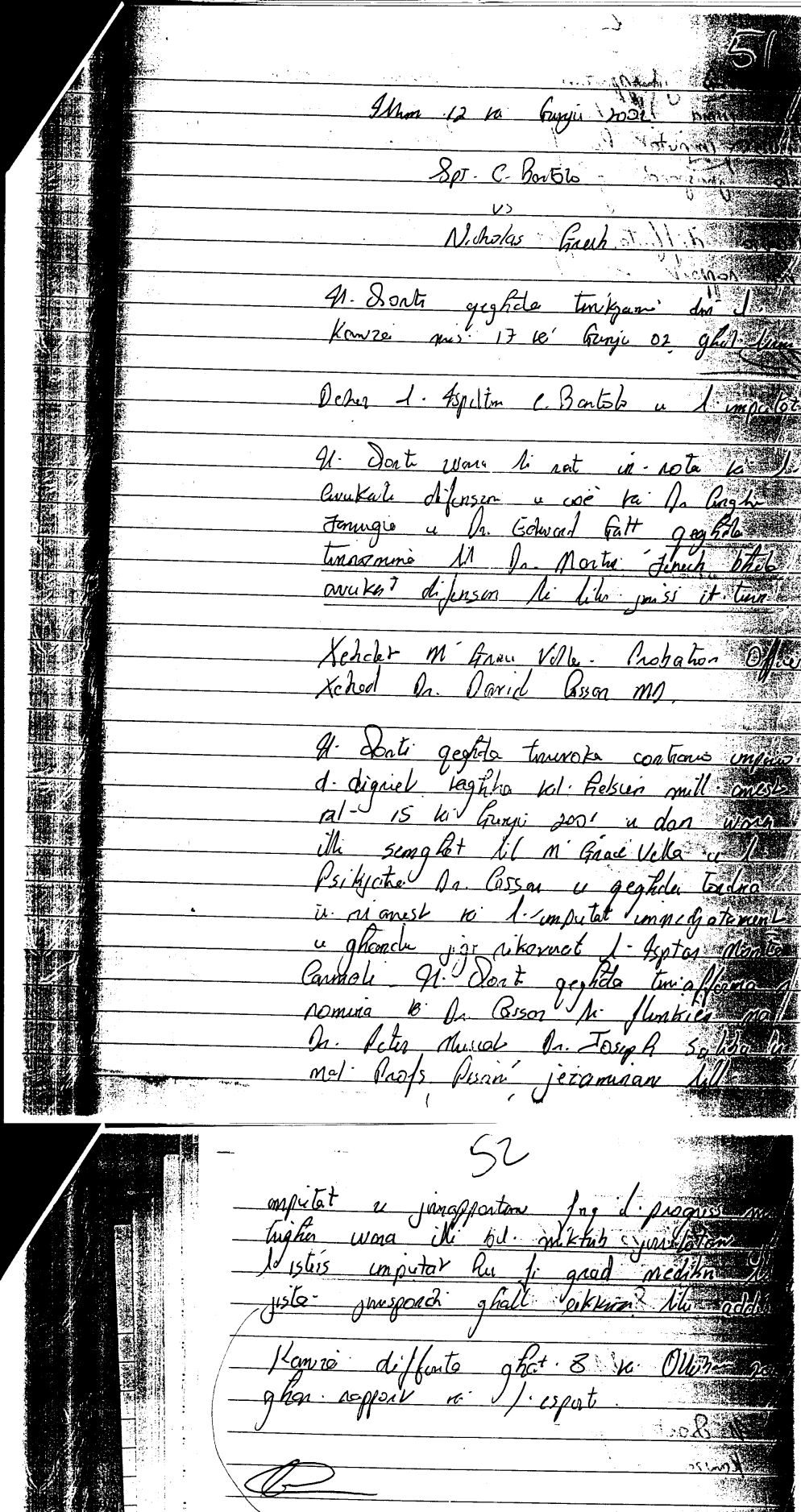 English translation:
The Court is referring the sitting from 17th June '02 to today.
Appeared Inspector C.Bartolo and the accused.
The Court (Magistrate Carol Peralta) after seeing the note of the defence lawyers of the accused, that is of Dr. Anglu Farrugia and Dr. Edward Gatt, is nominating Dr. Martin Fenech as legal aid (of the accused) whose turn it is.
Testified Mary Grace Vella Probation Officer. Testified (Psychiatrist) Dr. David Cassar.
The Court is revoking the bail granted to the accused on 15th June 2001 and this after having heard Mary Grace Vella and Psychiatric Dr. David Cassar and is ordering that the accused be arrested again immediately and should be recovered in Mount Carmel Hospital. The Court is reaffirming the nomination of David Cassar who together with Dr. Peter Muscat, Dr. Joseph Saliba (this one later resigned from this role) and Profs Joseph Pisani are to examine the accused and report on his progress and in writing state whether the accused is in a position to respond to the accusations he is accused of. Next sitting scheduled to 8th October 2002 for the report by the experts.

Note how lawyer Martin Fenech is written down as the one who's turn it was to be appointed as legal aid. Yet Magistrate Carol Peralta verbally and abusively nominated lawyer Tonio Azzopardi instead and my relatives ended seeking his advice, the advice of the one they 'heard' being mentioned in this court sitting of 12-Jun-02 by no other than the Magistrate himself.

In my second Court case of 2014, I didn't know of a lawyer who could best defend me, so when asked by the Police during interrogation, decided to nominate this lawyer Dr. Martin Fenech and they made the arrangements themselves calling him, supposedly to defend me, but instead he defrauded me covered up the abuses of those involved. 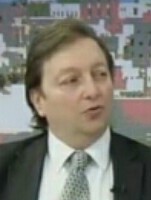 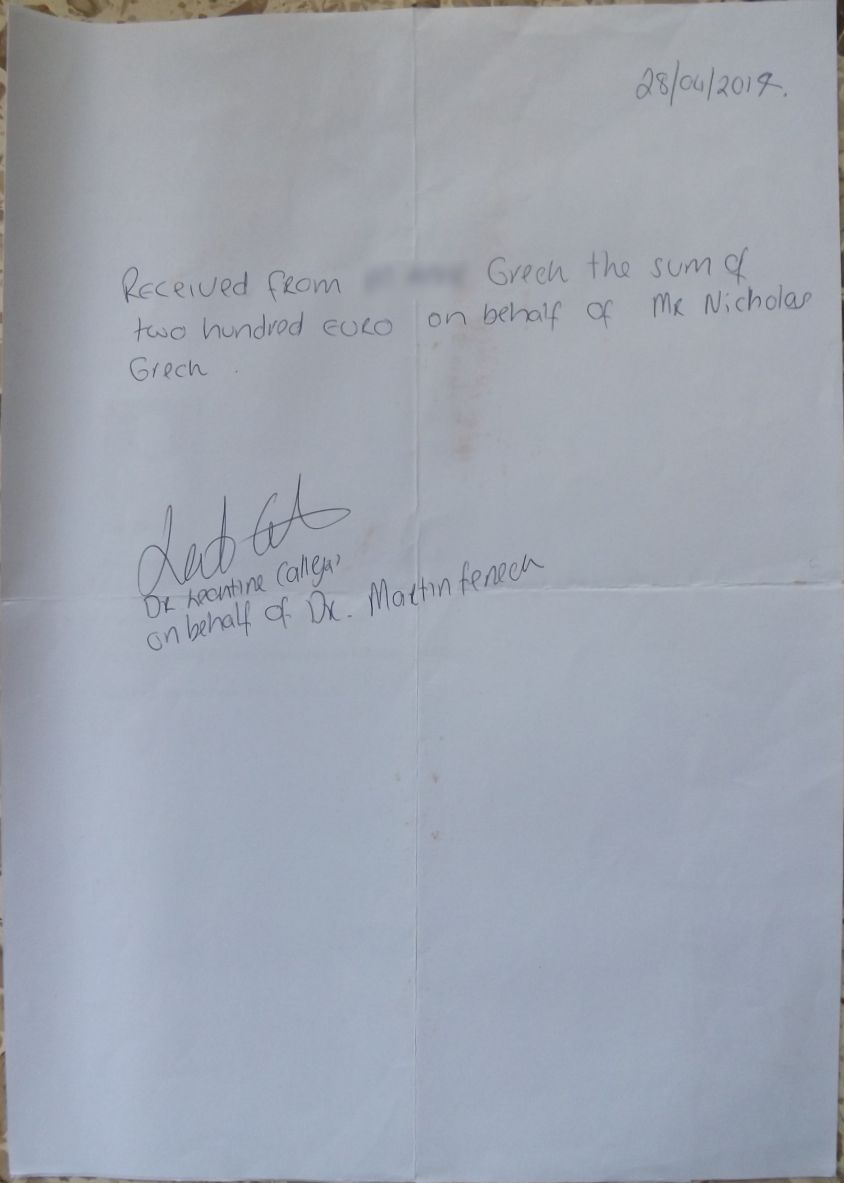 The one above dated 28-Apr-14 is one of several payments made by my relatives to laywer Dr. Martin Fenech. There were still 6 court sittings to follow, so one could expect how much more payments my relatives had to do. Now go fetch my court case (if one day it is found, because as I said it has 'mysteriously vanished' from right under the Court's eyes) and see if there was just one instance, just one, when this lawyer dared defend me. You will find nothing because he never, never did - he just fraudulently took me money as my defence lawyer but vilely ended never uttering just a single word to defend me despite the great contradictions in the accusations as done by the Police. He just left them to frame me up and character assassinate me with all liberty amongst others.

Also, while locked at Forensic section at Mount Carmel Hospital till the sentence was given on 26-Jun-14, I was kept in a cell with other 4 inmates, one of them being a certain British national Steve Bradbury. He had some case involving importation of drugs and this same lawyer Martin Fenech had been appointed as his legal aid. Yet this Fenech never appeared in Court to defend him, with the result that this Bradbury ended being given the maximum sentence while Fenech possibly ended pocketing the money from legal aid anyway.