Menu to other web pages
Home Page (or click banner) Court sitting of 5-Jul-01 (this page) Court sitting of 12-Jun-O2 Letter from Commission for the Administration of Justice Lawyers 1 Lawyer 2 Lawyer 3 The poison of pills I never took from the very start Letter from Tribunal in 2005 (this page) The unfounded accusations Written in the Court sentence: used to find them already dead My Pets My research Malta Police Frame-Ups The fake Psychiatrists' reports and Magistrate Carol Peralta's revenge on me My court case which vanished from the Court Archives Emails and letters I sent Medical Council Members in 2017 Emails sent to Animal Welfare Unfounded hatred towards me, even ending with a death fatwa Impunity Malta Style Victims of Psychiatry in Malta Depicting poison as cure Money down the drain at Mount Carmel Hospital Who is Frederick Azzopardi? Contact

Extract from the court sitting of 5th July '01 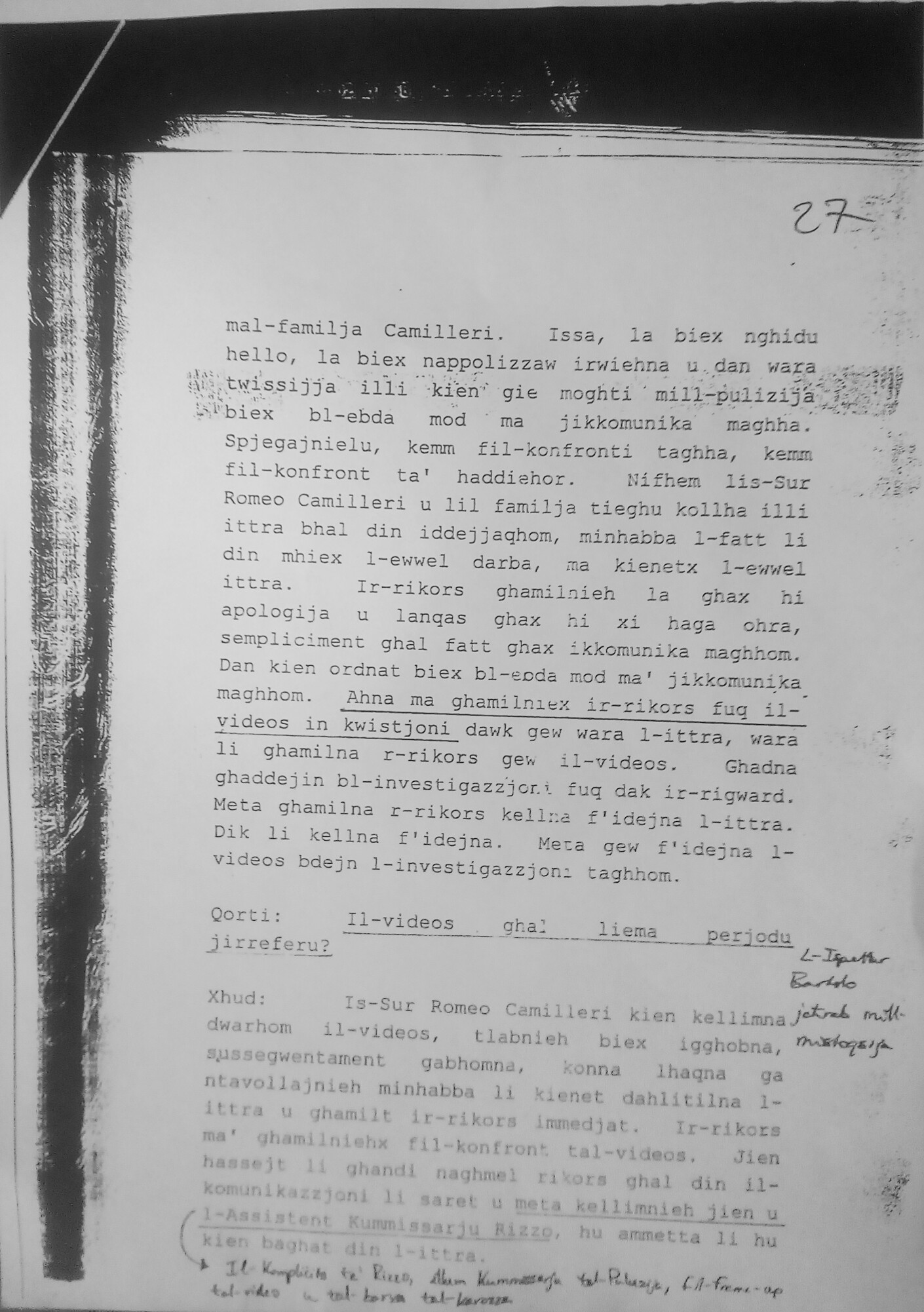 English translation: (the parts in brackets are my additions)
(pg.27) Now, neither to say hello, nor to apologize ourselves and this after a warning that was given by the Police to not in any way communicate with her. We explained to him, neither with her nor with any other. I understand that to Mr. Romeo Camilleri and all his family, a letter of this sort annoys them, namely because it was not the first time, was not the first letter. We made the recourse neither because it is an apology, nor because it is something else, simply because of the fact he communicated with them. He was ordered to in no way communicate with them. We did not make the recourse because of the videos in question (the mentioned R. Camilleri had just beforehand falsely testified mentioning the video), those came after the letter, after we made the recourse came the videos. We are still investigating in this regard. When we made the recourse we had in hand the letter. When we got the videos in hand, we began investigating them.
Court: To which timeframe do the videos refer to? (Note Magistrate Carol Peralta is asking on the videos because of the commotion created in the Court when R. Camilleri had beforehand testified about them).
Witness: Mr. Romeo Camilleri had talked with us (Note the plural) regarding the videos, we asked him to bring them, he subsequently brought them, we had already submitted it (the recourse) because had came the letter and submitted the recourse immediately. We did not make the recourse concerning the videos. I felt I had to do the recourse because of this communication made, and when we talked with him myself and the Assistant Commissioner Rizzo (the two for whom the plural was used), he admitted he had sent this letter.

The handwritten parts are my notes after having probably submitted this document to the Commission for the Administration of Justice and are 1) Police Inspector Carmelo Bartolo (the witness) avoids the question, 2) The complicity of John Rizzo in the frame-up of the video and the scratch on the car.

Note how first they came with this supposedly overwhelming evidence of the video to make me loose the bail, and then it resulted in being no evidence at all because it was never mentioned again - it was a blatant frame-up and perjury false testimony. R. Camilleri was an ex-registrar of the Courts and Magistrate Carol Peralta used to refer to him as "my friend". As regards the mentioned apology letter I had sent them, it was sort to make them fall for my bait, in part to excuse myself for my wrongdoings and at the same time exploit their intense appetite for revenge for them to end commit crimes on me that help me uncover their true mask, possibly turning the case in my favour, make mine look negligible compared to theirs, as in fact happened.

From the way that R. Camilleri had testified when asked to describe the contents of the video, I realized that it was in fact me who was recorded in the video, only that this had happened before my arrest, yet they, with all the blessing of the Police, tried to frame me up made it appear to have taken place afterwards to end loose me the bail. The subsequent abuse by Magistrate Carol Peralta in the 4th Court sitting of 4-Feb-02 threatening me of smashing me against the wall was a direct consequence of this frame-up on me with this video in his attempt to cover-up this and other abuses I had just told him about. This wasn't the only frame-up the Police had done on me, another one was the Police statement, despite not containing my true signature to the point that I ended having one of the accusations, i, that of falsifying signatures ("he did falsifications with fake signatures") they submitted it to the Court in my name anyway.

Now ask yourself if such a big fraudster and liar of Psychiatrist David Cassar who covers-up abuses of mere staff / nurses whom I had reported for passing entire nights when on work sleeping, of stealing patients' food and even ended breaking me my laptop, would you think he would have thought it twice to cover-up the abuses of such big head as Magistrate Carol Peralta and the rest of the friends of friends?